Every day Meridian 180 members take part in multilingual online conversations on timely and pressing topics that have the potential to better the Pacific Rim and the world by tackling the big issues of the day.

But to truly understand what Meridian 180 is about—and why it may offer the best hope for resolving future crises in the Pacific Rim and beyond— we need to go back to its beginnings.

On March 11, 2011, Cornell Professor Annelise Riles was living and working temporarily in Tokyo with her family. “It was a beautiful day,” recalls Riles, who was picking up her son from daycare when suddenly, without warning, the ground began to shake. 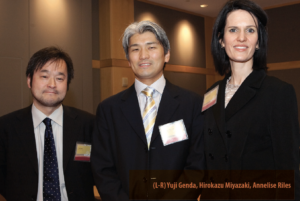 While Tokyo experienced only tremors that day, the magnitude-9 earthquake that hit northeastern Japan unleashed a giant tsunami, which caused thousands of deaths and much destruction within a short span of time. Riles recalls her own sense of helplessness as she viewed images on television of the water moving forward swallowing up people, while helicopters filmed the disaster from above.

But the tidal wave soon led to another disaster: a disabled power supply and reactor cooling system failure at the Fukushima Daiichi nuclear power plant in the inundated area, causing a nuclear accident in which three cores virtually melted and radioactive chemicals were dispersed to places as far away as the North American coast.

“Almost immediately many of the people I knew and cared about,” says Riles, “lawyers, professors, bureaucrats, began to ask: ‘How could this happen? Japan is a major industrialized society, considered one of the safest in the world—and yet it turned out we weren’t safe at all, ’” she says.

“The disasters produced a profound uncertainty, in which people were not really sure what was going on or what kinds of long-term effects they would have,” recalls Cornell Professor Hiro Miyazaki. “That gave rise to this need for a safe space where we could share our concerns and questions with others,” he says.

Comments Riles: “People I knew started talking about how part of the problem was that ideas and issues around nuclear regulation had only been debated among a small number of experts who thought alike, read the same papers and agreed with one another. Outside ideas couldn’t reach that inner circle,” she says. “We began to think that maybe our contribution at that moment could be to focus on that problem, so that there might be fewer disasters in the future,” Riles says.

She also wanted to figure out a way for people to talk about the disaster not just as a Japanese problem but as the transnational problem.

She had already presented plans the previous fall to then-Cornell Law School Dean Stewart Schwab for the program that would come to be named ‘Meridian 180.’

“Annelise wanted something different than just a conventionally conceived program located in a university,” recalls Miyazaki. “She was already thinking about some sort of virtual discourse for doing a whole range of new things that are beyond what universities usually offer. She had this personal dream of creating new kinds of connectivity among a much broader range of people from many different fields on both sides of the Pacific that might lead to problem solving,” he says. “But she also knew that to make that kind of connection happen we needed to create a translation mechanism.” 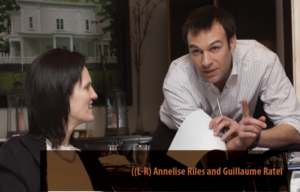 Schwab says: “I thought Professor Riles’s idea for a different kind of online forum was imaginative as a way to get academics, practitioners and policy makers to have real conversations with each other and work together to solve societal problems. The plan to have participants write comments in their native languages in online conversations and having a team of people translating their remarks so others could understand them was also very clever,” he says.

“What this would mean, functionally and symbolically, was that it would not be just a U.S.-dominated idea.”

Approached to join the project as a Core Idea Group member, international law scholar Fleur Johns, a professor with the faculty of Law at the University of New South Wales, Australia, recalls: “I welcomed the opportunity to be involved in experimenting with a new route, design or setting for collaboration, especially one that offered some respite from monolingualism.”

The roll-out date for Meridian 180 had been mid-May 2011, but when the disasters struck Japan in mid-March of that year, Riles persuaded Schwab to approve moving it up. “The thing that really pushed me into starting it earlier was this hopelessness among people I knew,” she says. “One of my immediate goals was to show them that we could turn this situation into one that proved their lives mattered.”

“I thought Professor Riles’ idea for a different kind of online forum was imaginative as a way to get academics, practitioners and policymakers to have real conversations with each other and work together to solve societal problems” — Stewart Schwab

“I called Annelise right after the earthquake to make sure that she was safe,” recalls Guillaume Ratel, assistant director of the Clarke Program in East Asian Law and Culture at the time.

“It came up that there was a need to actually start the first multilingual online conversations right then,” he says. “We were in the middle of development of the online tool at the time,” says Ratel, “but we managed to put it out there in four days so it could be used to help people in Japan feel less isolated.”

There was also a rush to give the new program a name that fit.

It was very much brainstorming between Annelise and me,” says Ratel. “We were looking for a name that had both a traditional and modern element. And because we were trying to bridge people and countries, we were seeking something in the middle. At some point, we arrived at the idea of the actual middle of the Pacific and came up with Meridian 180.

“The 180th Meridian is what divides East from West,” Riles points out, “and we wanted to cross that line in every possible way as well as approach our task so differently that it that would be 180 degrees beyond conventional past efforts.”

“One was about the limitations of experts and what we know from all the research in different fields about why they fall into these kinds of traps,” says Riles. “We began to feel that what happened at Fukushima represented not just one incident, but that there could be many more such crises to come,” she says, “not necessarily nuclear, maybe something entirely different. But the root of the problem would be the same, a kind of silo thinking from a group of people who are cut off from everyone else and who as result might make the wrong decisions,” Riles says.

The second online discussion, led by Japanese labor economist Yuji Genda, was about what people thought the government of Japan should do to deal with the disasters and which ideas really deserved priority.

“We learned a lot from each other through those initial forums about how this kind of transnational and trans-Pacific conversation may offer a new space for thinking about how to respond to a national or international crisis,” says Miyazaki.

“By May or June we had had several more forums on other topics,” Riles relates “— comparative law and legal translation and things that were not directly related to the crisis per se but they touched on this problem of overcoming barriers or misunderstandings or limitations in one’s thinking in some way.”

Then the online discussions really took off.

Participants who had only perfunctorily agreed to take part now began telling Riles how meaningful their involvement in the forums had become, or how they had changed their thinking about the way they did their jobs, or helped them learn about new disciplines, or introduced them to ideas they’d never encountered before.

“I remember pausing from my work that summer and looking at these online conversations and thinking: ‘My goodness, this is bigger than what I
ever imagined it would be,’” she relates.

Most exciting, “someone from the financial world whom we had invited into our conversations told me he wanted to run a seminar for his clients on what we were discussing,” says Riles, “because it was actually highly relevant to financial markets, but people in finance hadn’t had access to those ideas before. It made me realize that by providing complicated ideas in a format that allowed people outside those fields to actually understand them we had done something very important.”

Nevertheless, Meridian’s roots still remain crucial today, says Miyazaki: “There’s a strong sentiment among the Core Idea Group members about the need for Meridian to serve as a platform for intellectual crisis response. I think that part is deeply shaped by the original moment of Meridian. We were really not prepared for those disasters back then. And at the same time we learned a lot from each other at those early online forums about our own limitations, and how this kind of transnational and trans-Pacific conversation may offer a new space for thinking about how to respond to a national or international crisis.”

To Miyazaki, the most successful example that captures that initial moment of insight when those first conversations were launched, he says, has been Meridian 180’s online conversations among academics and practitioners about central banks and the financial crisis and what has happened in the financial markets after the crisis.

“Through those conversations we have developed a unique and, I think, useful approach to global finance as a result.”