Three men and four women stand in a semicircle in a bright, high-ceilinged room. At one end a man grimaces and shakes his fists. Another gazes upward with his arms outstretched. To his right, a woman squats as if trying to lift a heavy stone; next to her, a man in a black tee-shirt stands rigid in a military salute.

After a moment they relax and face their audience, a few dozen casually dressed people standing in a ragged circle.

“Stress!” someone yells from the back.

This is an exercise in “ethnographic theater,” in which groups of participants try to convey complex concepts using movement, facial expressions, and gestures.

While it generates plenty of smiles and laughter, its mission on this day is deadly serious: to help prepare some of the best minds in Asia and the Pacific—professors, lawyers, executives, technocrats—for the next great crisis, be it financial, polit­ical, natural, or something we can scarcely imagine.

“Most of you in this room understand the limitations of scholarship as it is practiced today to solve the problems that need to be addressed,” Cornell law and anthropology professor Annelise Riles explained later to the group. Chief among those, she said, is the failure of experts in different fields to work with, and learn from, one another.

“If you look at an event like Fukushima, you understand immediately that silos produce disaster.” —Annelise Riles, Director, Meridian 180

Breaking down silos was the number one goal of “Developing Proposals for Risk Mitigation in the Asia-Pacific Region,” an international conference held at the Southern Beach Hotel and Resort in Okinawa, Japan, from July 8 to 10. The program focused less on drawing up specific plans for disaster prevention or emergency response than on getting high-powered people from different worlds used to talking, listening, and thinking together.

The meeting was sponsored by Meridian 180, a project Riles founded through Cornell Law School in the aftermath of the 2011 Fukushima tsunami and nuclear crisis, along with Cornell’s Mario Einaudi Center for International Studies, Ewha Womans University in Seoul, and the Institute of Social Science at the University of Tokyo. Participants came from Korea, Japan, China, Singapore, Australia, the United States, and Canada. 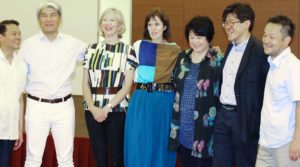 The Okinawa conference was Meridian 180’s first annual “global summit,” signaling the group’s intention to foster stronger in-person connections among its members. Until now, Meridian 180 has focused on building a largely virtual community of scholars and practitioners through multilingual online forums and smaller regional meetings.

The online discussions have produced “some beautiful little nuggets and moments of connection,” observed Fleur Johns, a legal scholar at the University of New South Wales who is part of Meridian 180’s “Core Ideas Group.” “But it readily became apparent to us that we need to also explore other ways of coming together in order to turn those nuggets into possibilities for action and possibilities for practice.”

Yet the last thing they wanted to do, she said, was put on a conventional academic conference, in which participants present their work and go home. So they decided to invoke the Japanese concept of asobi, which roughly translates to “play.”

“It can also mean the time and space necessary for things to come together and get off the ground,” explained Yuji Genda, a professor of labor economics at the University of Tokyo’s Institute for Social Science. “For people from different environments and standpoints in terms of culture, institutions, customs, and so on, isn’t a certain amount of asobi necessary for them to feel comfortable?”

In one workshop, called “Talking to Strangers,” small groups of participants traveled to local sites to conduct impromptu interviews with people they found there. They came back to the hotel to discuss what they learned, then collectively to imagine crisis scenarios using keywords inspired by their encounters.

In another workshop, called “Snap­shots from the Next Crisis,” attendees shared photos and other images that they felt represented the world’s most pressing threats. Those ranged from nuclear prolif­eration and cyberterrorism to inequality and despair.

Not all the sessions were devoted to asobi. A new multinational working group was formed during the conference to tackle issues related to the future of nuclear energy [link to nuclear group article]. As a first project, members decided to work together on a compar­ative study of compensation schemes implemented in the wake nuclear accidents in different countries around the world. 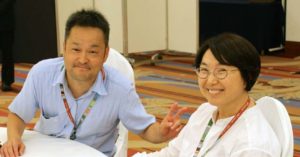 A common refrain during the weekend was that crises are by their nature unpre­dictable. While it’s important to have robust plans in place, it’s impossible to anticipate exactly what will happen when complex systems go off the rails. Ulti­mately, then, the best way to prepare for crisis is to build and nurture networks of creative, open-minded people who are ready to come together to solve problems in real time.

Eunice Kim, a law professor at Ewha Womans University who runs Meridian 180’s Korea office, told attendees of the hunger she felt for meaningful interaction with colleagues in other countries and other disciplines. When she was asked to form a Meridian 180 group in Korea, she wondered if her compatriots felt the same way.

“In many ways, Korean society is very closed, very dogmatic, very institutional­ized, and at first I wasn’t sure that people would be interested in trying something new like this,” she said. But it turns out they weren’t just interested, they were enthusiastic. More than 100 Koreans have joined Meridian 180, recruited by Kim and her colleagues from academia, busi­ness, and civil society. They have organized themselves into 12 working groups tack­ling a wide range of social and technical problems. Twenty-three Korean members attended the Okinawa conference.

“Just when I was beginning to lose faith in institutions, and what institutions can do for us, I’ve come to see that this is a great way that we can really add value to society,” Kim said.

A conference highlight was the announcement that the University of Tokyo’s prestigious Institute of Social Science has agreed to become Meridian 180’s official base in Japan. Ewha Woman’s University has housed the proj­ect’s Korea office since late 2014.

In addition to spearheading their own projects, the regional bases will take responsibility for translating Meridian 180’s online forums and other communi­cations. Translation into English, Korean, Japanese, and Chinese has been one of the project’s hallmarks since its founding.

Translation, of course, is about commu­nicating across boundaries. One of the group sculptures during the ethnographic theater exercise addressed that directly. The participants all stood still, slightly crouched, their hands cupped behind their ears. When they were done, one of the members explained.

“We are standing in silence,” he said. “That way, we can listen.”