More than 65 members from around the world gathered at Meridian 180’s 2nd Annual Global Summit in Brussels, Belgium, to strengthen ties started on Meridian 180’s online forums, and to dive into new research initiatives around the conference theme of “Responding to the Rise of Inward-looking Societies: Building New Models of Cooperation.”  The conference was held at the Steigenberger Hotel from May 19 to 21, 2017.

The aim of the conference was to bring the collective expertise of a broad group of experts to address the changes and challenges in trade, migration, security, and energy caused by the rise of nationalism and the fracturing of the global ideal. Focusing on policy areas through a multidisciplinary vantage point is a special element of Meridian 180’s work model.

“Often when you approach a particular hot-button issue, such as migration, you are road blocked by partisanship or ossified thinking,” said Annelise Riles, founder and director of Meridian 180 and professor of law and anthropology at Cornell University. “The Meridian 180 approach is to knock down those entrenched barriers. Not just by expertise but also by geography. When a diverse mix of experts from different countries comes together, everyone is forced to think through a different lens, and this seems particularly important during this moment of rising nationalism.” 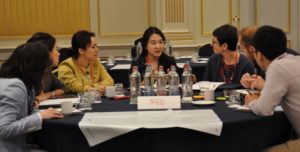 Over the course of the conference, economists, legal scholars, scientists, historians, anthropologists, linguists, and sociologists from Asia, Europe, Australia, and North America worked in concert with policymakers and members of industry and business to examine the effects of nationalism and closing borders on four “idea streams” or policy areas of Immigration, Energy, Trade, and Security.

By approaching these complex topics from a multidisciplinary vantage point, longstanding policy assumptions would be re-examined and perhaps even re-invented. Margaret Woo, professor of law at Northeastern University and a member of the Trade idea stream, likened the process to a “deconstruction of the matter in order to allow a re-examination.”

A focus on the hot-button topic of international trade

In the Trade idea stream, participants spoke one after another based on connections that they felt between the previous speaker’s insights and their own, resulting in a far-ranging yet organic discussion that created new linkages, such as between the role of regulation in trade and indigenous rights. The final presentation was in the form of a theatrical polemic in which the participants shouted the most extreme, unbalanced statements about trade they could think of, provoking—in many sense of the word—emotion and discussion.

The process and outcome of the trade idea stream resulted in the following three takeaways:

The final presentations of the three other idea streams, energy, security, and migration, were equally thought-provoking. In the energy idea stream, exploring areas of cooperation among the different stakeholders in the energy sectors was identified as a path forward toward productive dialogue among nation-states. The security idea stream expanded the definition of security to include important issues such as food security, energy security and physical security, and focused on the need to have a broad international conversation about the multidimensional aspects of security with a diverse representation of stakeholders. After two days discussing the complex issues of immigration and culture, the migration group presented the act of telling a story as a starting point to collaborating on an interdisciplinary level and having some possible impact on increasing understanding of the complex and emotional issue of immigration.

Jan Kleinheisterkamp, associate professor of law at the London School of Economics, observed in a post-conference reflection, “What the weekend has changed for me is the realization that trusting more in intuition and empathy may be the better way of approaching this phenomenon – rather than getting frustrated over the limitations and maybe illusions of any rational approaches.”