The Changing Politics of Central Banking

People often describe a nation’s economy as a ship, with its political leaders in the wheelhouse charting the course. If you stick with that analogy, then central bankers are the mechanics in the engine room, keeping everything tuned and lubricated. Th e last thing you want to do is distract them with politics.

When the ship hits an iceberg, though, both the analogy and the dictum break apart. 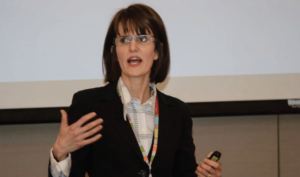 The failure of many central banks to anticipate the 2008 global financial crisis has led to dramatic changes in both their policies and the tools they use, including new forms of lending, new regional collaborations, and experiments such as negative interest rates.

It also raised a raft of questions about the independence of central banks and central bankers. How insulated should the banks be from broader public policy? Who should be watching over them? When does oversight become interference?

These were some of the issues addressed at “The Changing Politics of Central Banking,” a first-of-its-kind conference organized by the Mario Einaudi Center for International Studies, Meridian 180, and the Global Finance Initiative on April 18 and 19, 2016, at Cornell.

The goal of the conference was “to stage a conversation with social scientists and professionals about finance and its future,” said Hirokazu Miyazaki, director of the Einaudi Center and a professor of anthropology.

“You can’t possibly understand what’s happening in the world of monetary policy without understanding politics.” 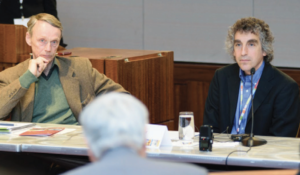 The conference was part of a larger initiative at the Einaudi Center to bring new forms of expertise to the discussion of complex technical issues, Miyazaki said.

That approach resonated with conference keynote speaker Adam Posen, president of the Peterson Institute for International Economics and former member of the Bank of England’s Monetary Policy Committee. “Interdisciplinary is a word that is tossed around a lot,” he said, “but here it is very real, and working,”

In his keynote address, Posen said that central bankers’ responses to crises have less to do with economic theory than with historical, political, and cultural issues. There should be no illusion that the bankers live in the real world, and that their decisions draw on experience, cultural norms, and personal judgment. In times of crisis, he said, “the world doesn’t look a lot like the theory.”

The tension between theory and judgment came up repeatedly during the conference. Some in attendance argued that central banks should focus on simple targets, such as keeping inflation at a constant rate. Others said bankers needed to recognize that in complex economies, nested in a global economy, meeting social and political goals required a more nuanced approach.

“Central bankers are often so absorbed in the ‘trees’ of the current economic situation that they lose sight of the ‘forest,’” added 2016 Henry E. and Nancy Bartels World Affairs Fellow Alan S. Blinder, a professor of economics at Princeton and former vice chairman of the Board of Governors of the U.S. Federal Reserve. “For their part, academic researchers need to train their powerful tools on real world issues instead of chasing intellectual will-o’-the-wisps.” 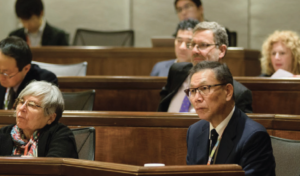 “Since the financial crisis, both practitioners and central banking scholars have recognized that existing intellectual paradigms for understanding the role of the central bank are no longer adequate,” said Annelise Riles, professor of law and anthropology at Cornell and director of Meridian 180. “Existing frameworks are far too narrow to take into account the broader political, social, and cultural implications of the work of central bankers on local, national, regional, and global scales.”

The first day of the conference was open to the public and addressed a range of questions facing central banks and the scholars who study them. What is the proper relationship between political policy and financial policy? How can scholars from the fields of anthropology, law, sociology, and political science help central bankers do their jobs?

The “Changing Politics of Central Banking” conference was co-sponsored by the Institute for the Social Sciences and the Tobin Project.