Technology impacts nearly every aspect of society today. How does the digitization of modern life affect the rule of law, the effectiveness of institutions, the functioning of democracies, and the systems of trade and business? Are ethics, values, and issues of human welfare evolving with technology? What risks and opportunities lie ahead, and what needs to be explored to build a future of integrity and security? 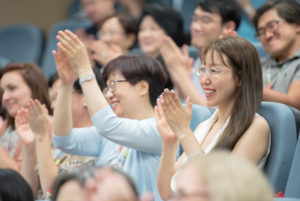 More than 70 members from around the world grappled with these questions as they gathered for Meridian 180’s third annual Global Summit in June. During the three-day meeting in Hong Kong, experts examined how critical sectors like banking and finance, gender justice, smart cities, data governance, and networked political movements and economies are being reshaped by new and developing digital technologies. The Chinese University of Hong Kong (CUHK) generously hosted the event and a series of pre-Summit workshops for local and international guests.

“Idea Streams” for each sector convened subject-matter experts and stakeholders from a range of disciplines into working sessions. With diverse backgrounds but a common goal, the Idea Streams collaborated to tackle the emerging challenges and identify areas of opportunity for action in academia, policy, and the private sector, which they then presented to all attendees on the closing day.

Banking and Finance
In the Banking and Finance Idea Stream, members discussed the imperative to balance safety with efficiency in the evolving global financial system. The group, which included experts from Hong Kong, Japan, Korea, Australia, Switzerland, and the United States, presented their initial findings on the question: What regulatory, institutional, social, and technological innovations can address the public’s loss of trust in the existing financial instruments and institutions in a transformative digital environment? 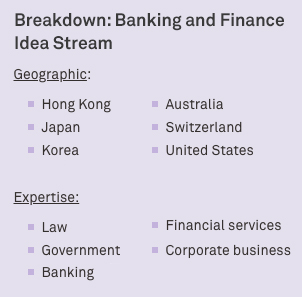 In particular, they found that lack of interoperability and poorly regulated digital-payment service providers have eroded public trust in and use of conventional financial instruments. Ultimately, as societies become more digitized, policymakers must promote the more efficient digital banks and currencies while also ensuring consumer security. If progress and balance are not achieved, there will be greater social disruption, instability, and inequality in the world.

This Idea Stream will transition to a long-term Working Group to tackle these issues through research and collaborative action.

Gender Justice
In the Gender Justice Idea Stream, members discussed the normalization of gender violence and inequality and assessed how technology both contributes to and counters this endemic issue. The group presented their vision for a more gender-equitable world, using cyberspace to increase awareness about gender injustices and to explore possible ways of incorporating gender-sensitivity into technology. They proposed creating an open-source clearinghouse to aggregate and exchange best practices in gender and sexual violence prevention and response, thereby cultivating a global community centered around gender-equitable technology and practices.

This Idea Stream will also transition to a long-term Working Group. It will begin its work with two pilot projects, one that focuses on sexual harassment education among university students and another that unites activists combatting revenge pornography.